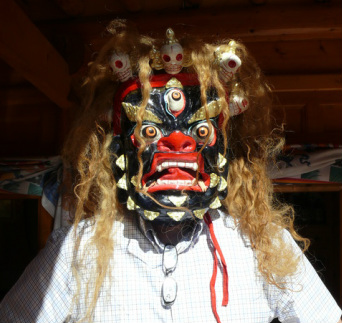 Author wearing Palden Lhamo mask made for him at Sengeshong Yagotsang 2010.

_I first encountered Cham dancing during a Tibetan New Year celebration over twenty years ago.  My detailed research started several years after that in response to the many inconsistencies, inaccuracies, and simply incorrect assertions found in various media.

As always, it is context that is fundamental to understanding.  During my research I have relied on Buddhist teachings as interpreted by senior Ge-she level tantric monks as well as interviews conducted with the help of my good friend, linguist, and former monk Tashi Phuntsok and erstwhile Nyingmapa colleague Tsedor Lama.

During my travels I have made several visits to Central Tibet and have spent time at Samye, Mindroling, Sakya, Ganden, Sera, and other popular monasteries and temples.  However, mucht of my time has been spent in Eastern Tibet (also known as 'Old Tibet' - Qinghai Province and Gansu Province) and I have been a frequent and consistent visitor to the Repkong monasteries, as well as Shachong, Gonlung, Namdzong, Kumbum, and Labrang, as well as the monasteries at Choni, Weido (Bimdo) and some others.

Further afield my wife and I have ventured into Sechuan province and the area surrounding Aba (Ngawa).  Monasteries visited include Kirti, Gomang, Setenling (Jonang monastery), and several Bon monasteries.

All of the photographs you will see have been taken by myself.  You will quickly note that the quality of the subject far exceeds my abilities as a photographer.

My research has resulted in three books, in various stages of assembly and (pre-) publication.  They are: 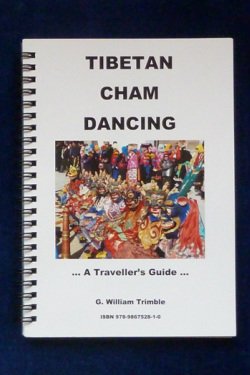 ... A Traveller's Guide ... written and designed for the traveller!

This pocket guide contains all you need to know to understand and to enjoy the basics.  'Tibetan Cham Dancing - A Traveller's Guide' introduces the Cham dance and some of its variations, describes the main and secondary dancers, and also explains the Shanag / Black Magician dancers.  The general sequence of the most common Cham is outlined.  Notes are provided concerning the history of the dance, the stories behind the significant dancers, and the Ritual Tools used during the dance.

Handy A5 size fits in thigh-pocket of cargo pants.  Clear plastic front and back covers protect book from elements (and coffee!) encountered along the way. 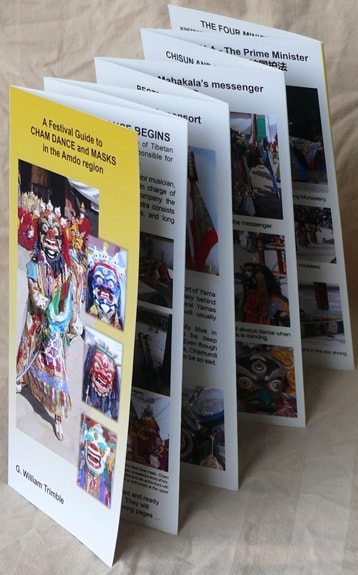