The main Cham dancers portray Dharmapalas or Wrathful Deities.  The dharmapalas are ‘protectors of the law’ and in Tibetan are called chos kyong.  Many of the Wrathful Deities were brought from India when Buddhism came to Tibet.  Others were originally Bon deities or mountain gods / local spirits who were put under oath by Padmasambhava or others to protect the Buddhist dharma.

The most common and popular dharmapalas are (Tibetan name follows / in italics):

The Dharmapalas, and their emanations and / or acolytes, are the main dancers encountered in most chams.  While some chams will give Yama the major role, others will rely on Ksetrapala from Mahakala’s entourage to take center stage for a while.  Begtse also figures prominently in many chams, and the popular Palden Lhamo and her assistants Chisun and Songdong can usually also be counted on to make an appearance.

But sometimes, depending on the monastery, its lineage, and other local customs, the main part of the dance will be performed by the Black Hats or Shanags.

The Shanags are the famous Black Hat dancers.  They are imposing, look impressive, and harken back to the days of sorcery and black magic in the world of Bon. 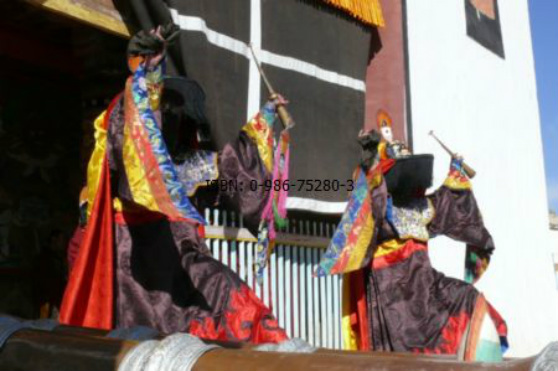 Arrival of Shanags, Gomar Monastery.
The Black Hats, also known as The Magicians, have a special place in the history of Tibetan Buddhism, being as some suggest indirectly responsible for the survival of the religion in Tibet.  Here is another popular story.

“Lang Darma ruled Tibet from 836 - 842 CE, having ascended to the throne by killing his older brother.  A strong supporter of the Bon religion, Lang Darma was determined to banish Buddhism from Tibet.  He ordered monks to de-frock, scriptures were burned and monasteries and nunneries were closed.  One monk decided that this was not right and determined to stop King Lang Darma.

Monk Pelgyi Dorje dressed in a Bon magician’s black hat and black cloak and found the King in front of the Jokhang Temple in Lhasa.  The monk started to dance with such prowess and agility that the King’s assistants begged him to come and watch more closely.  When the King was close enough, Pelgyi Dorje removed a bow and arrow from the big sleeves of his cloak and shot the King with an arrow through the heart.  As the King died, confusion ensued and the monk-assassin made his escape.

Mounting his horse, Pelgyi Dorje rode south out of Lhasa.  As he crossed the Kyichu River the charcoal he had smeared on his white horse washed off.  Pelgyi Dorje also reversed his black cloak to reveal only the white lining.  Thus disguised, the man in white riding the white horse was able to escape his pursuers.  Tibetan Buddhism had survived a great and odious threat.  Pelgyi Dorje proceeded to Namdzong where he spent the rest of his life in seclusion.”

The Bon magicians black hat and costume (zhva nag) gave rise to the name Shanag and its importance is enshrined in the Cham dance.

The Shanags have several functions in the dance, depending on the nature and location of the event.

In most dances, two Shanags announce the arrival of important dancers and are personal attendants to the Thunderbolt Dance Master, Dorje Lopon, who is in charge of all aspects of the dance.

In other aspects of some Cham dances, two Shanags are responsible for the implements that are given to Yama as he performs the ultimate activity of the Cham dance.

In other dances, a larger group of Shanags dance a major portion of the Cham.  At Gonlung Jampaling there is a spectacular and large Shanag cham dance during Monlam.  Another very special dance, the Gu Cham, was held at the Vajra College, Labrang Monastery, in the ninth lunar month of 2009. 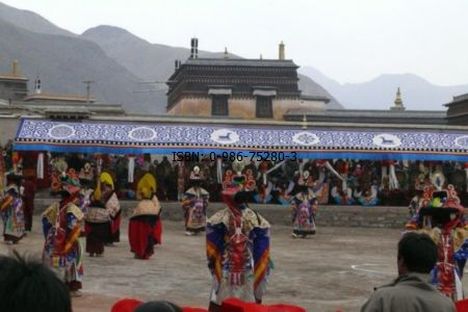