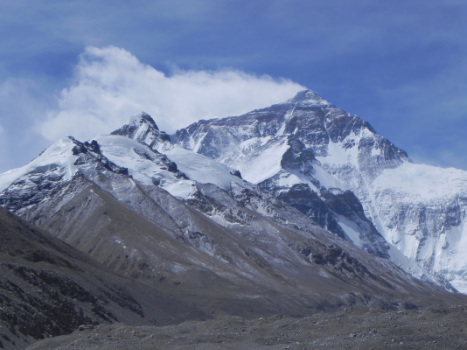 Mount Everest / Qomolangma / Jomo Gangkar (8848 meters)
Songtsen Gampo (617 - 650 AD) was the Tibet King who ‘prepared the ground’ for the introduction of Buddhism into Tibet, although he himself was likely a Bon follower.  His intelligence and energy were well known very early in his youth.   He married the Nepali Princess Bhrikuti in a strategic alliance to mollify the Nepali king.  Two years later he married the Chinese Princess Wen Cheng at the behest of her father, the Tang dynasty emperor Taizong.  Both wives were devout Buddhists, and they quickly convinced the sixteen-year old Songsten Gampo to allow the introduction of Buddhism into Tibet.  The Princesses eventually became important saints in Tibetan Buddhism.  Bhrikuti became known as Green Tara and Wen Cheng became known as White Tara.  (While Songsten Gampo appears very young by our current standards, life expectancy at his time was very short.  The eldest son ascended the throne when he was ‘old enough to ride a horse’ - about thirteen years of age!)

In his early twenties, Songtsen Gampo unified and subjugated many savage and unruly tribes.  He then went on to conquer Upper Burma and parts of Western China.  Militarily he has been compared with Alexander the Great (356 - 323 BC).  When he was finished his strategic military exploits, he declared himself King of Tibet.

At this time Tibet had no written language and so the people could not read about the new religion in their own tongue.  King Songtsen Gampo felt that this lack of an alphabet and written language was a general failure in many ways, so he sent a senior minister to India to study Sanskrit and develop a Tibetan written text.  After several years his subordinates returned and the king approved the new written language.

In 637 AD Songtsen Gampo built a fort on a rocky peak called Marpori or Red Hill in Rasa; in 641 AD he started construction of the Jokhang Temple.  About this time he also changed the name of the city from Rasa to Lhasa.  He died a few years later at the Alexandrian age of thirty-three. 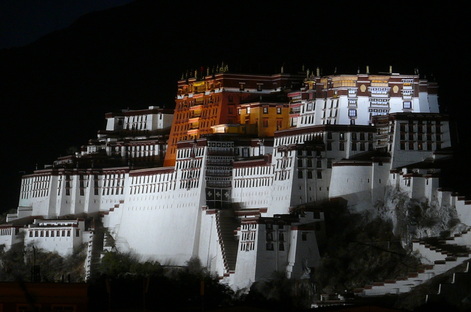 King Trisong Deutsen (742 - 800 AD) ­is credited with the introduction of Buddhism into Tibet.  One hundred years after King Songsten Ganpo allowed the monks to teach Buddhism, they were still meeting stiff resistance from the followers of the Bon-po religion, the original ancestral religion of Tibet.  As King Trisong Deutsen continued to push the introduction and acceptance of Buddhism, the Bon priests invoked evil spirits and instigated large scale discontent among the people.  As he tried to establish outposts throughout the country, he made little headway.  He was particularly unable to make any progress with construction of the first Tibetan Buddhist monastery at Samye (located southeast of Lhasa).

King Trisong Detsen finally sent envoys asking that Padmasambhava, also known as Guru Rinpoche, come from India and defeat the magic of the Bon shamans.  The king reasoned that this would ensure the successful construction of the Samye Monastery which would be a strong monastic base for the expansion and growth of Buddhism in Tibet.

Padmasambhava came and assessed the situation.  In order to overcome the Bon influence and visually demonstrate the strength, relevance and power of Buddhism to the Tibetans, Padmasambhava decided to perform an adaptation of a powerful Indian Buddhist dance called the VAJRAKILAYA dance.  The complete dance required several days.  First the ground was consecrated and a thread-cross was erected to catch evil spirits and emanations.  A threadcross is a web lattice of two or more sticks, in the shape of a cross or pyramid, made of coloured thread woven around the sticks.  Then the dance was performed which forced all the evil and malevolent spirits into a skull-topped pyramid of dorma (dough) which was ultimately burned. 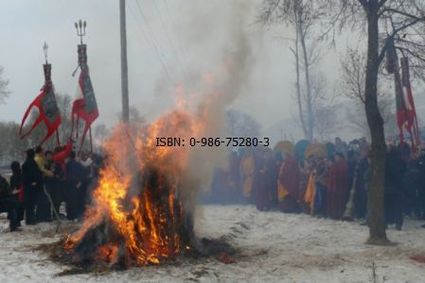 The Vajrakilaya dance, the Dance of the Dagger as first performed by Padmasambhava in Tibet in the 8th century, is the origin of the Cham dance.  Buddhism had started to take hold in Tibet.

Over time, Tibetan Buddhism has evolved four major orders or schools or sects:  Nyingma, Sakya, Kagyu and the Gelug (which has its roots in and has absorbed the Kadam order).  The Nyingma (also known as ‘Red Hats’) are followers of the old traditions introduced by Padmasambhava.  The Sakya started during the reform movement of Atisha and were prominent from the 11th to the 14th  century. The Kagyu order was also formed during the reform movement by a student of Atisha and they played a major role in the 15th and 16th centuries.  The Gelug order (known as ‘Yellow Hats’), started by Tsongkapa in the early 15th century, befriended the Mongolian khan and by the 17th century were fully in control of both religious and secular power in Tibet.  The Gelugs, or Yellow Hats, remain the predominant sect in Tibet today.  Recently, the 14th Dalai Lama (of the Gelug order) recognized the original Bon religion as the fifth major school of Tibetan Buddhism.

While there has been the occasional separation of religious and secular power in Tibet, most of its history is that of a theocracy, where the religious masters wield secular / government power.  As a result, some monasteries became great centers of learning, and some of the larger ones were hailed throughout Asia as preeminent in their academic fields.  Monks were religious advisors but were also a strong part of the social fabric, acting as social workers, medical advisors, and so forth.  Tibetan families were traditionally large in order to support the nomadic lifestyle, and at least one son or daughter was sent to a monastery or a nunnery for education.  This deepened the bond between the people and their religion, as well as making for a large number of monks within the population.  However, since the rise of New China in 1949, secular power in the Tibet Autonomous Region is firmly in the hands of the Chinese government and not the monks.

The nature of the Tibetan experience with theocracy is evident in the Potala Palace, famous for its Red Palace (religious part) and White Palace (secular / governmental part).  This inter-connectivity between church and state, with the priest-king, explains why travel in Tibet involves many visits to monasteries - they are places of worship per se but they are also museums, libraries, social centers, hotels, and centers of communication. 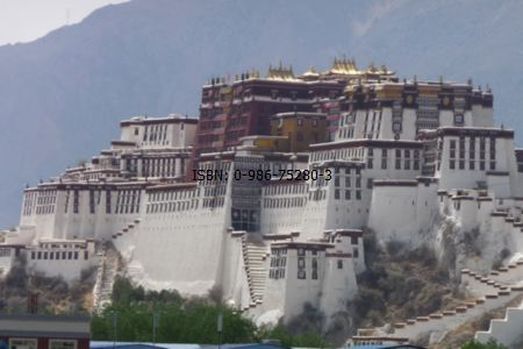 Potala (White Palace - government; Red Palace - Buddhist temples and tombs)
The Cham dance is celebrated at various times throughout the Tibetan Buddhism year, but mainly it is a compelling feature of Monlam celebrations at Tibetan New Year.  Losar is the first day of the New Year which is a day of celebration and visiting, very much like any where else in the world.  Monlam is The Great Prayer Festival and is about ten days long.  It begins a few days after the New Year, according to the local monastic calendar.  It may include specific activities such as (1) Displaying the Tangka (also called 'Sunning the Buddha'), (2) Transporting the Maitreya (Buddha of the Future), and (3) the Cham dance.  These activities fill a major part of one day each, although the Displaying the Tangka can be preceeded by The Tea Ceremony.  Sometimes the Butter Sculpture Display is an additional event, occupying a full evening once the sun has gone down.

The Cham dance, while performed during Monlam, is not restricted to the New Year period.  As an expression of the origin and strength of Tibetan Buddhism, it is also danced at significant times during the year, such as Padmasambhava's birthday, the birthday of Tsongkapa, during the fourth lunar month for Saga Dawa, and at a few other times.  It is important to note that most monasteries do not dance Cham, even some large and important ones as Ganden, Drepung and others.  Many smaller monasteries will join together and hold a combined Cham at an agreed location.