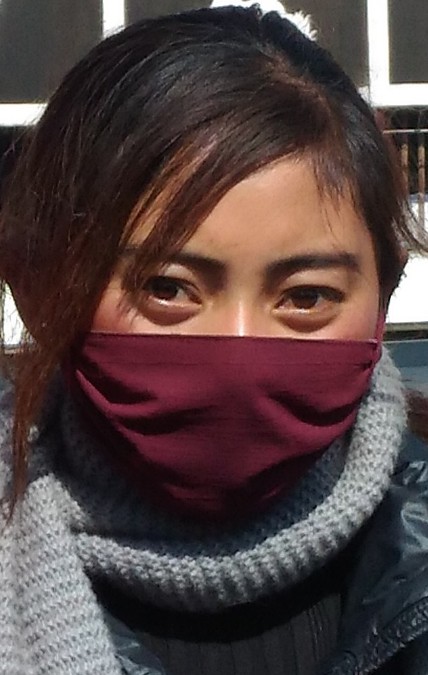 The eyes have it - a friend at Se Monastery (Jonang) in Aba.

It was a most fantastic excursion.  Susan and I were joined by five inquisitive travelers (including three returnees), our three excellent drivers with their Prada Land Cruisers, and the inimitable guide Tsedor.

The initial five days were spent in Repkong, participating in the usual round of Losar activities such as Displaying the Thangka, Maitreya Transportation, and Cham dance - all as interpreted by various Gelug monasteries in the area. 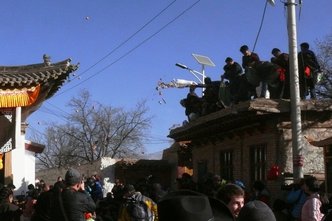 Early in the morning of the first day we headed off to Gomar Monastery to participate in the Butter Tea Ceremony.  But first there was the introductory surprise - apples, oranges, candies, potato chips, snacks, etc. delivered to the ceremony participants by happy teenager boys!  They were up on the edge of the roofs of surrounding buildings with sacks of goodies and, at the appropriate moment, threw the treats and emptied the sacks into the outstretched arms and apron-skirts of the assemble and anxious (and happy) throng!

The following day we headed west to visit the largest Bon sect monastery in the Repkong area. Bongya Monastery is a stunning place, sitting atop two south facing slopes with a (cleansing) stream flowing across its front. We watched the Maitreya Transportation ceremony and joined in the kora around the monastery, following the statue and pilgrim monks counter-clockwise around the perimeter of this pleasant place. 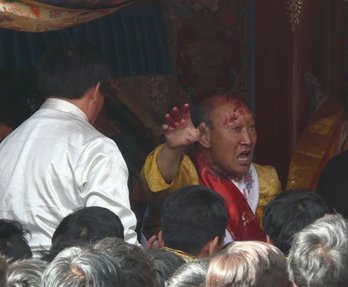 Returning from Bongya, we stopped in ZhangJia village to witness the local Shaman Festival.  We had seen this ceremony for the previous two years, and this year the interaction with the Shaman was shorter than previous years.  It was reported by locals that the mountain god was unhappy with the morality of the villagers during the past year and hoped they could improve their lifestyle and have a happier community.  This could also result in a longer and more interactive visit by the mountain god next year.  This photo shows the Shaman as he prepares for his invocations on behalf of the mountain god. 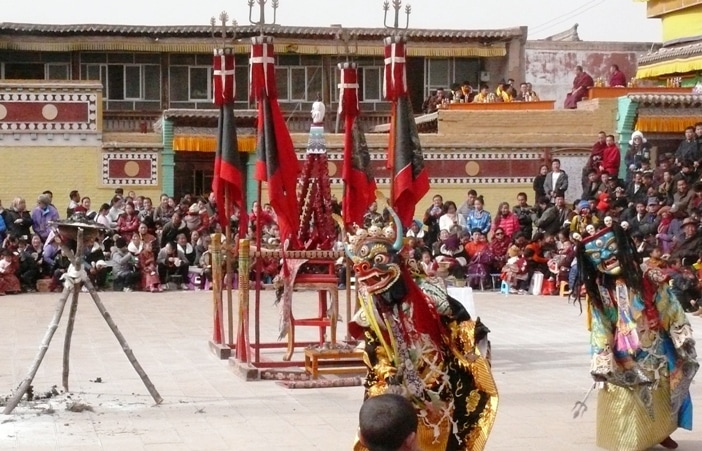 We returned to Magotsang to watch their Cham dance. Each year, the Magotsang Champon (Cham dance master) makes small changes to the dance for improvement and understanding. This year Yama and Chamundi, his consort / yabyum, danced together for about five minutes, alone, as shown in this photo. 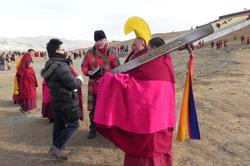 Our first visit in Aba was to Gomang Monastery located to the west of town.  Gomang is a large and extensive monastery housing approximately 600 monks.  It is an architecturally significant Gelug monastery which is off the beaten track for most tour buses and multi-camera long lens photographers.  We watched the Displaying the Thangka ceremony and were happy to speak with the Disciplinarian.  In this photo are (L to R) Tsedor our guide, myself, Disciplinarian, and his Office Holding Bar monk.  In the background is the thangka on the displaying hill. 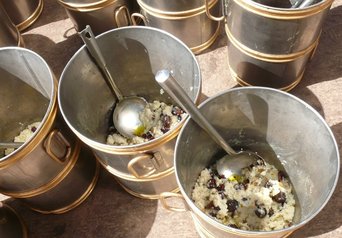 Lunchtime at Se monastery - rice and dates in some soy   milk - delivered by barefoot novitiates to their seniors       who    are chanting in the Assembly Hall.

Nearing the end of our excursion into Aba and area, we headed northeast a few kilometers to visit Nangzhik Monastery (called Narshi by the locals), which is the largest Bon monastery in this area.  We went on the day of the Bon Cham dance.  Narshi is a traditional (non-reformed) Bon monastery.

The cham is influenced by local history and custom and starts with a parade of horses and riders into the courtyard where the riders ring the edge of the dance area.  The cham itself is quite different from Gelug cham dance formats and will be the subject of a separate section in this website. 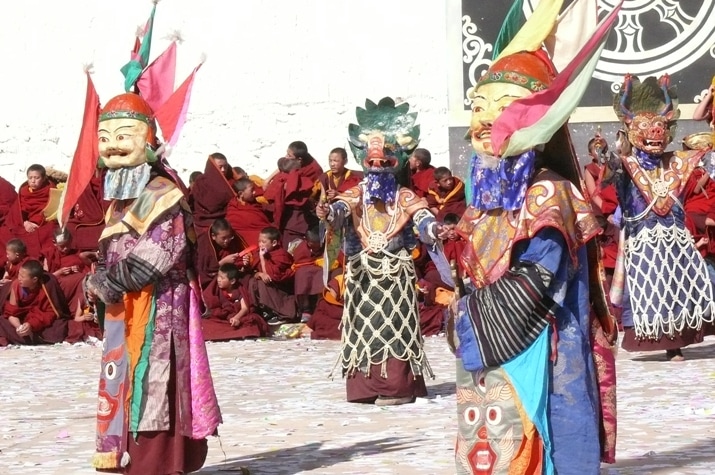 Of note is a dancer that looks like Yama. He is on the right of the photo and does not have any skulls on his head! This character is also a minor dancer in the priority lineup of importance. 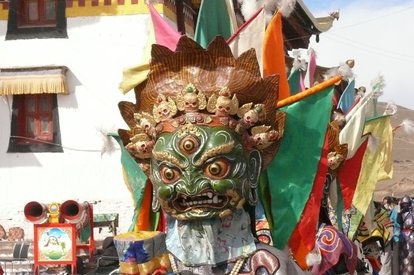 The main dancer, and the leader of the priority procession of cham dancers is a green faced deity ...

... not the normal and maximum five (5) skulls experienced in cham dances of other sects.

Initial identification has been difficult, but there is a consensus that this deity represents Sipai Gyalmo a prominent Bon wrathful deity.
We made a short diversion from our direct route to Repkong and Xining and jogged to the west to visit the town of Hor and its famous Mani Wall.
This is a 600 meter long wall of carved slate stones holding the complete texts of both the Kanjur and the Tanjur.  The photos below show the wall looking from east to west and a section of the carved slates.  One can notice the carved inscriptions on each stone and also the fact that the slates are piled face down to avoid water pooling and subsequent damage during the rainy season.
The wall is located atop a hill overlooking Terton Chogar Gompa, a Nyingma monastery. 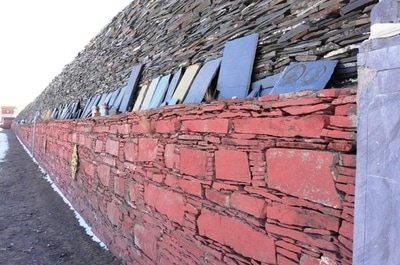 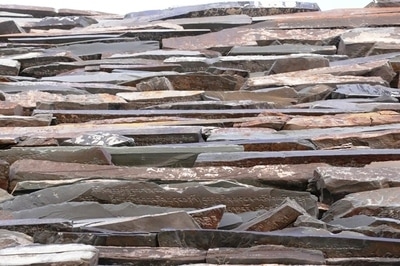 On our final day, before leaving Xining to return to Beijing, we visited The Qinghai Tibetan Medical and Cultural Museum.  This museum houses the world's longest thangka measuring 420 meters in length.
The thangka tells the story of Tibetan history and culture.  It was painted by a number of famous Tibetan thangka painters and its level of detail is inspirational.  Below I have shown two photos, one illustrating the origin of the Tibetan people with the union of a monkey and an ogress, the other showing portions of the Mitra Mandala. 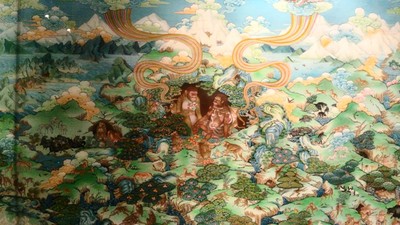 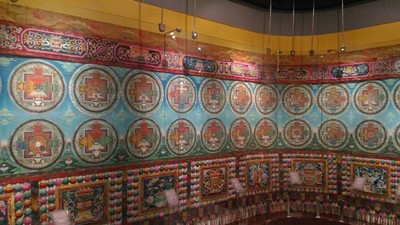 And so it was that our excursion came to an end after more than two weeks of adventure, excitement, and challenge.

The TNY2017 adventure was an eye-opener with respect to the Bon sect, its thangkas and murals, and its celebrations.  Of particular note are the differences and other attributes of its Cham dance ...

... more on this in a separate link!
O ma ni pad me hum
Home / contents