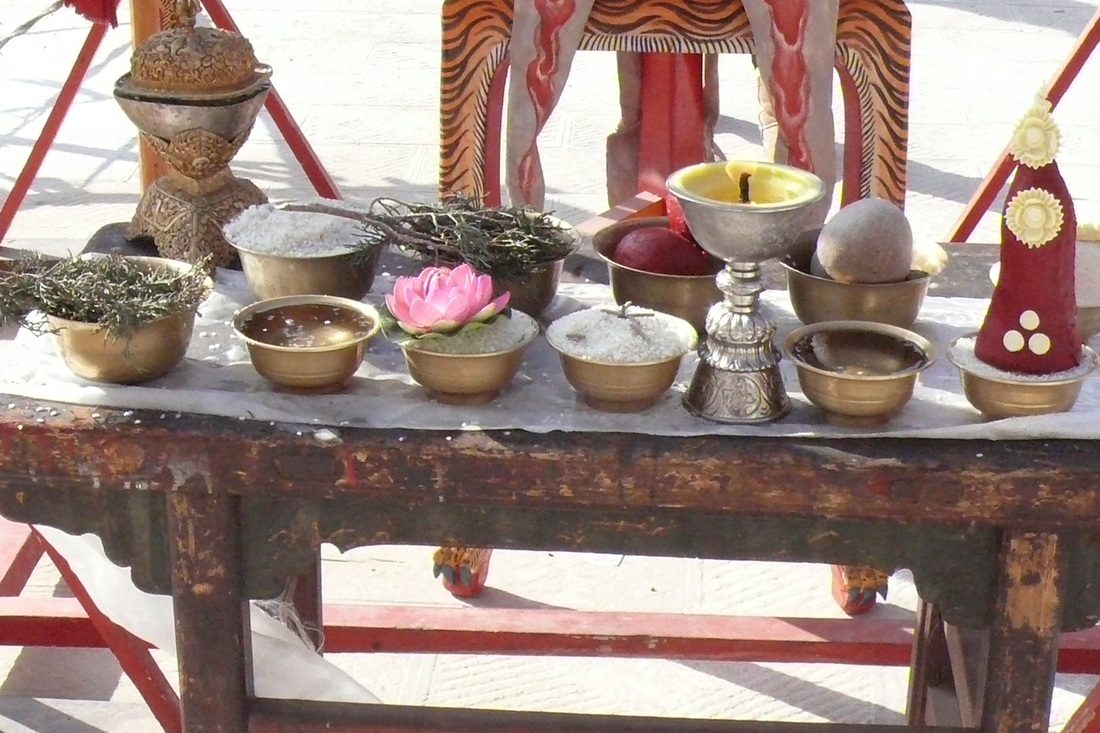 Implements and Instruments used in the cham dance ceremony

Throughout the conduct of the Cham, the dancers circle clockwise in time with the music, and sometimes quietly chant to themselves, as they ensure the edges of the dance area remain sealed so that evil spirits cannot escape.

During the dance, various objects are carried in the right and left hands of the dancers, as seen in photographs elsewhere in this script.  These hand-carried implements are called Ritual Icons.  Some ritual icons are not hand-carried but are rather carried in the crook of the elbow or across the body supported by the bent forearm and elbow.  The ritual icons are also found in the iconography of tangka paintings.  These items are major clues when identifying the character portrayed by the dancers, and determining the difference between the various and similar forms of Mahakala, Palden Lhamo, or others and the manifold assistants and acolytes that they each have.

Ritual Icons is the name given to the 'implements' that are used by the dancers during the Cham.  This is to differentiate them from the 'instruments' used by the main actors in the dance (Yama, Ksetrapala, Shanag Master) in the final destructive moments of the dance.

Many of the instruments used have their origins as battlefield weapons or in the horrific areas of cemeteries.  These instruments of terror, slaughter, destruction and sacrifice were taken from the hands and the arsenals of the enemies of Buddhism and turned against them.  In the hands of the wrathful protectors they become transformative weapons and symbols of wrathful compassion to destroy the illusions of the human ego, and overcome greed, ignorance, jealousy, hatred and pride.  The instruments used by main dancers such as the Shanag Master, Yama or Ksetrapala to ensnare, kill and destroy evil emanations are called Table Tools.  These table tools are used and exchanged during the dance as determined by Rol Pon and the assistant to Dorje Lopon.

We shall first examine the implements or Ritual Icons carried by Cham dancers.  Subsequently we will examine the instruments or Table Tools used in the final destructive moments of the Cham dance.

The following ritual icons or implements are carried and used by the various Cham dancers in the course of the dance to appeal to and appease the Wrathful Deities, while also ensnaring and capturing evil emanations.

These ritual icons or implements are carried and used by the various Cham dancers in the course of the dance to appeal and appease the Wrathful Deities, while also ensnaring and capturing evil emanations.

But the focus of the dance is the destruction of evil.  So when negative forces are captured and ensnared in the lingka, specific instruments are used to destroy them.  Their usage forms the major part of the second or middle portion of the Cham dance.  These instruments will be examined in some detail.

In the final stages of the dance, the main dancer uses various instruments to subdue and destroy the evil spirits.  These instruments are called Table Tools and are used by Yama, the Shanag Master and sometimes Ksetrapala to kill and dismember the evil enemies.  Items previously shown are not repeated. 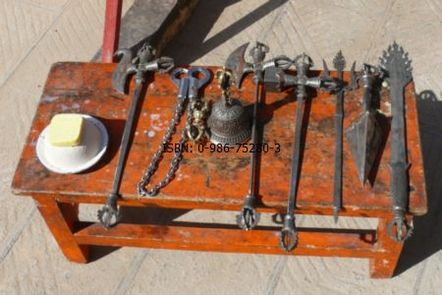 Table tools or dancing instruments come in various sizes and shapes.  But in all cases the purpose is clear.

Compare these table tools, from Sengeshong Magotsang (Xia Wutun) with those found at other monasteries. 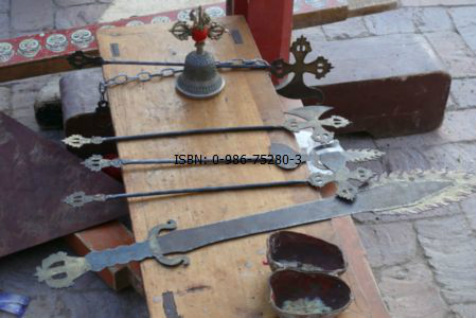 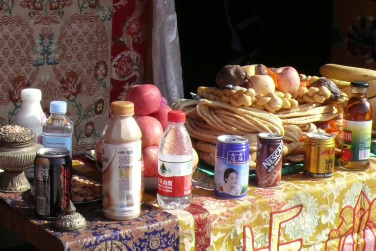 ... and of course the Living Buddha, the Abbot, and various Rinpoches will need some refreshment and sustenance during the course of the Cham dance.