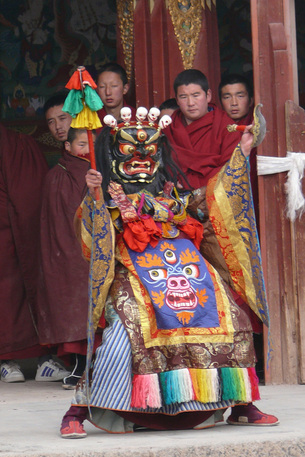 
From the perimeter of the courtyard, all eyes were fixed on the top of the staircase.  The drums and horns and cymbals had ceased their drone; all was silent in anticipation and hope.  Searching the ornate doors with the high lintel, eyes strained for any sight or sign to foretell the arrival of the terrifying disciple, the chosen one, the one they call   …   and suddenly there he was!

His masked head was both compelling and terrifying.  His blue-black face, like thunderous rain clouds at the height of the storm, was framed by golden wing-like eyebrows and a dark beard spattered with offal.  Three protruding and bloodshot eyes, signifying all-seeing into the past, present and future, glared through strands of black hair, disheveled and unkempt befitting one whose actions are more important than appearance.  His blunt demon nose sat atop a snarling mouth with four fangs, sharp teeth and a red tongue curled in anger and determination.  He wore a diadem of five miniature human skulls.

Dressed in immaculate silks with sophisticated and detailed embroidery, with an emphatic and deliberate swagger, he made his way to the top of the stone steps.  Arms spread, his costume hung in colorful drapes as his masked head swiveled to survey all before him.

In the right hand he carried a medieval looking axe, like a halberd, the ominous kind with the head curving down from the shaft that joined it to the two foot long handle.  In the left, he grasped a crescent-shaped curved chopper soon to be applied with surgical precision to unseen and unknowing enemies.  Both instruments were marred from use and obviously honed to a razor’s edge.  With knees slightly bent and hips thrust forward, he shook with energy and intent and anticipation … and compassion.
Without warning, he started bounding down the stairs, two and then three at a time, leaping with feet pointed as if to dare fate to interrupt his entry onto the stage of confrontation.  Suddenly, from mid-way down, he flung himself into the air and flew onto the ground in front of his waiting compatriots.  His costume made him appear to have outstretched wings; he landed lightly on his embroidered felt boots.  Crouching, with arms outstretched and weapons at the ready, he scoured the courtyard for signs of foreboding and evil.

The cymbals crashed, the drums pounded and the horns bellowed.  Everyone was transfixed.  Yama, The Lord of Death, had been waiting for his Chief Minister and acolyte.

And now, Ksetrapala had arrived to do his work! 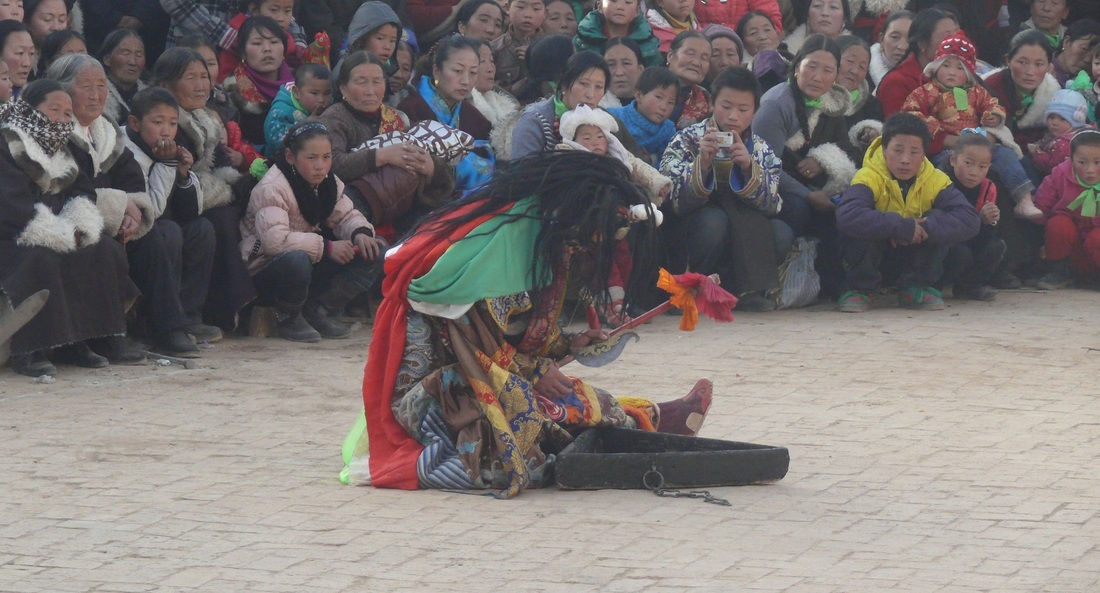 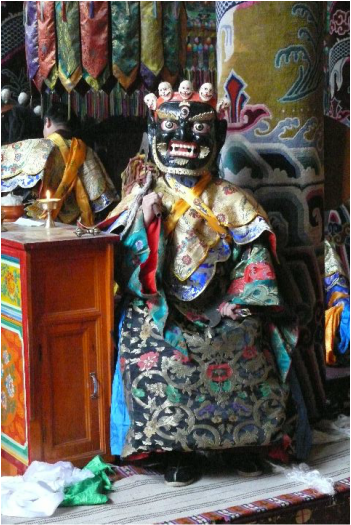 Ksetrapala at rest before the dance.