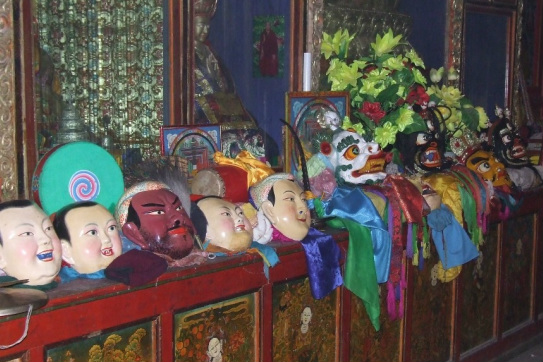 Masks are the embodiment of the Wrathful Deity.  While they drive terror and great fear into the hearts of the forces of evil, the masks also provide tranquility and calm to the Buddhist practitioner who is seeking enlightenment through meditation and prayer.  Masks that have survived for a long time are considered special and very powerful.  They become venerated in their own right; the faithful make pilgrimages to worship in front of them, particularly on special days or during religious festivals.  One such item is the famous stone mask of Palden Lhamo located in the Jokhang in Lhasa.

In the Himalayan area, masks were traditionally made of wood, particularly in lower altitude and warmer areas such as Nepal, Bhutan, Sikkim, and India.  In Tibet, because of altitude and climate, masks have been made of copper, brass, or paper-mache because of the scarcity of wood at high altitudes.  Currently, the favorite medium seems to be cotton strips which when dried, painted and finished closely resemble fiberglass.
As a researcher of cham dancing and its attributes, I wanted to have a cham mask.  Having been several times over several years to Sengeshong Yagotsang monastery in Amdo, Qinghai Province, I asked a senior monk who had become a good friend if he could help.  In February, the monk, who is a renown tangka painter and sculptor, agreed to make the mask for me.  During one of my trips I took the photo of the clay mould.  Once the mould was dry (and the monk found the time!), small rectangular cotton strips were soaked in a barley brine with tsampa and other 'ingredients' and applied to the mask.  A total of fifteen applications (layers) were made, and then the mask was allowed to dry.  The drying was critical, because if the mask was not properly and completely dried it would break when the mould was removed.

The drying process required three or four very hot days - typically July or early August in Old Tibet.  These days came and the mask shell was ready.  The clay mould was smashed away and the mask remained intact and whole!!  It was then smoothed (sanded?) and painted with the appropriate liquid in the correct colours. The mould and the finished mask, of Palden Lhamo, are shown below:
The ear detail is not shown because in the finished mask the ears are covered by hair.  The hair is natural color yak hair that comes from a special herd; my monk friend had to travel 300 kilometers each way to retrieve exactly the right color and texture hair for this mask.  The other major attribute of Palden Lhamo's mask was added to the mouth just before I took delivery of the mask, at the monastery, in early November.  I also had a Jinamitra mask crafted for my collection.

Cham dance masks generally have five distinguishing characteristics, not including the skull diadem worn atop:

a.  nose - this is a defining characteristic, most common is a variant of demon (daemon), while Yama and some others (such as Palden Lhamo) are bull (yak) or buffalo; supporting dancers can be various birds, animals or mythical creatures;

b.  mouth - open how much, sneering (down turned) or not, four fangs or straight teeth, tongue rolled up and back or bitten between teeth

c.  eyebrows - straight, flaming, bushy, curved downward, does third eye in the middle of the forehead have an eyebrow or not,

d.  marks around the mouth - facial hair is not common amongst Tibetans.  What is seen as marks at each side of the mouth and under the lower lip (much like a goatee) is stylized leftover food - remnants of wrathful gorging on flesh, blood, organs, intestines and brain, which leave slobberings around the mouth.  Sometimes confused with a beard.  Over the years, these marks have become more regularized and symmetrical.

e.  beard - running around the jaw line and traveling up to the area of the ear, it can be solid or regularized patchy, depending on the mask maker.  In the case of Yama, Lord of Death, the line curves around his mouth and slants upward to the snout and eye area.  In the case of Chamundi, the consort of Yama, there is no beard - the blue mask belongs to a lady!

Wrathful deities have a forward crown or diadem with five miniature human skulls, each representing a negative affliction turned into a positive virtue:

a.      Ignorance, which is defeated to become wisdom

b.      Jealousy, which is defeated to become accomplishment

c.      Pride, which is defeated to become commonality

d.      Attachment, which is defeated to become appreciation

e.      Anger, which is defeated to become understanding. 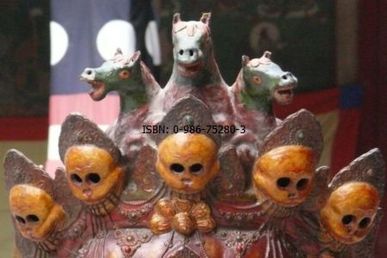 The five-skull diadem of Hayagriva, a Dharmapala, noteworthy because of the green horse heads atop his mask. The photo was taken at Kumbum Monastery during the Hayagriva Cham. The mask is made of wood, and weighs about 25 pounds (more than 10 kgs). It is thought to be about 100 years old. The dancer wearing this mask is very experienced and very strong. 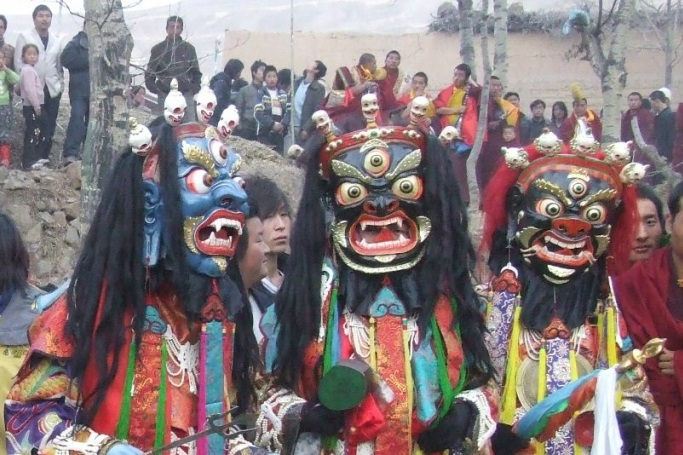 Chamundi, Gonpo Chagdrugpa, and Palden Lhamo at Sengeshong Magotsang.
The Wrathful Protectors shown above highlight similar aspects of mask design and layout.  Palden Lhamo, on the right, has a bull nose indicative of her special status as the only female Dharmapala (although it might also indicate some local artistic license) and has red hair.  Chagdrugpa in the center is graced with an enriched red band holding his five-skull diadem, indicative of his local importance and seniority as one of the most powerful Mahakala emanations.  Chamundi in the blue mask on the left is Yama’s yum and being a gentle although wrathful lady has no ‘beard’.

Much detail on the cham masks has come from oral history since most of the written texts and old masks were destroyed in the 1950s and 1960s and 1970s.  The mask shown in the photo above is an exception.  Recently, with modern materials and vibrant colors, mask designers and mask makers have been able to apply some artistic license to their craft and the results are even more terrifying!

In all cases, the masks are designed and decorated to terrify evil emanations and influences and those that would interfere and distract the Buddhist practitioner from their deep meditation and reflection on attaining a higher state.  The more terrifying the mask in appearance the better it is able to protect the worshiper.  While they have been called ‘Devil Masks’, they are the wrathful faces of protector deities whose duty is to save the faithful from harm.

As the faithful attend Cham dances they become familiar and trusting of the deities represented in the dance.  This is essential since the deities will be encountered during the 49-day Bardo experience between death and re-birth, during which time the devotee will be attacked, distracted and tested for the strength of their belief.  They will need to be comfortable with a wrathful protector who is coming straight at them ... since at the last moment he will deflect and attack an unseen evil emanation approaching from behind the devotee.

Cham dance masks are generally about two or three times the size of a normal human head.  Because of weight, center of gravity, sharp-edge issues, and to prevent chafing and cuts, the dancers wear padded caps or folded towels covering the forehead, sides of the face, and even the neck.  The favorite head covering is the toque.

Old costumes are a rarity; almost all were confiscated and destroyed during the Cultural Revolution.  Those that were hidden were severely degraded by insects and rodents and were virtually without use.  Cham dancing was forbidden for over a decade.  When the cham started to re-appear in the early 1980s, costumes had to be re-constructed from memory or from the details provided in sutra writings.  This was not an easy task since most Kandjur and Tandjur had also been destroyed during the Cultural Revolution.  Foreign museums and private collections, however, were very helpful.

Luckily, brocades and silks along with a wider selection of more modern haberdashery were now available and soon more colourful and flowing dance costumes started to appear.  Previous decorations made of human or animal bone could now be fashioned from a wide variety of plastics - easier to acquire, easier to work with, and much less contentious to the outside world.  And it was the outside world upon which attention was starting to focus - attention that could result in tourism and inter-change and the influx of hard currency.  Such monies could then be re-invested into the purchase of other items for the cham and the monastery as a whole.

Costumes are worn over the usual dress of the monk.  The normal dance costume consists of  a gown with long broad sleeves over which can be worn a short triangular cape, sometimes called a tippet.  This poncho-like mantle may be embroidered or decorated; its colour(s) may also import further iconographic information.  Sometimes the dancer wears a breast ornament or a circular breastplate also known as a mirror (me long). 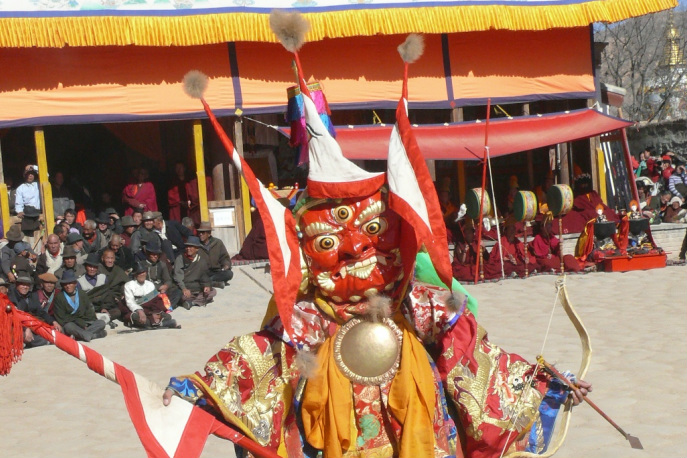 Bone ornaments can also be worn.  The ‘five bone ornaments’ referred to in literature are earrings, necklace, bracelets and anklets, an apron or girdle, and a bone breast ornament.  The apron looks like a net with a wide mesh - strings of round beads connected by larger square plates with auspicious Tibetan characters carved inside.  While bone ornaments can be found in Yama and Mahakala cham dances, more commonly these ornaments are found at chams danced by Shanags. 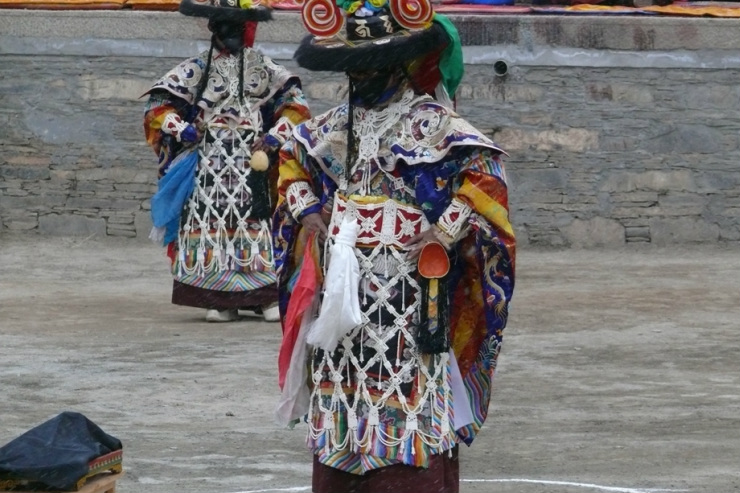 Shanag dancers wearing bone ornaments. Note the skullcup in the left hand.
Another important part of the costumes are the shoes worn by the dancers.   They vary from the normal slippers that everyone seems to wear (regardless of the weather) to elaborate, colourful, ornate boots befitting only the most important dance characters.  Boots are also specific to the dancer and his character. 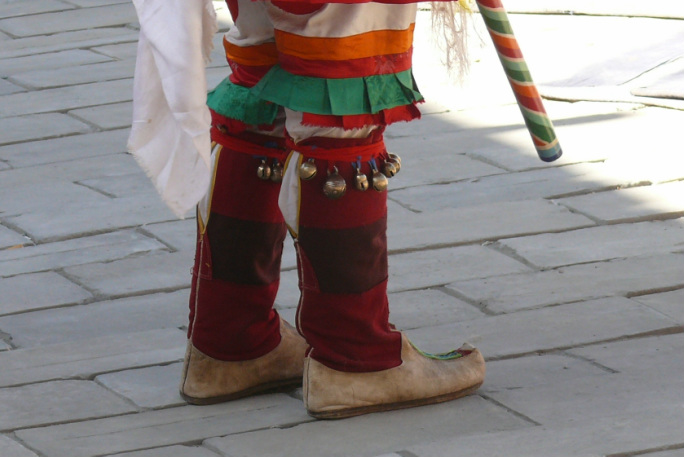 Boots worn by Gangre at Gonlung Jampaling. Note the attention to detail in the overall costume (bells, painting on baton, etc.). 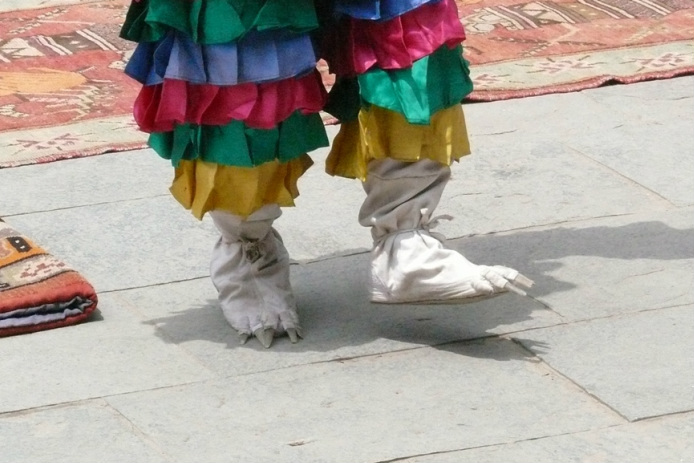